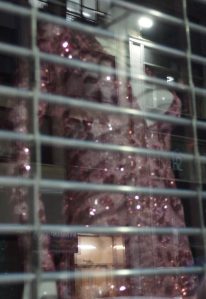 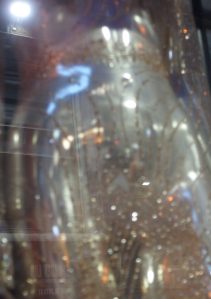 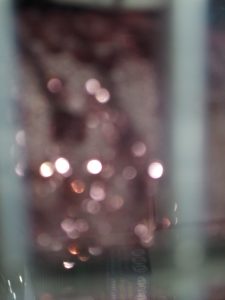 After my in-gallery time at SHINE I had a conversation with Kim Sargent-Wishart via Skype (she lives in Australia). She’s doing a project called Trash and Treasure, and she wanted to talk about the innate fascination of discards. She asked me, “How do you salvage light?” At first I hemmed and hawed, gave the vague answer I’ve been giving so far, but then I actually came up with something more concrete. In making images of light and shine, I am able to “own” it without gathering the actual material. Image-creating instruments get a lot of flack, but they can free us from the need for ownership. In the same way that “hunters” can now “shoot” non-human animals with cameras instead of guns, I can take a picture of a sparkly dress. My desire for its tawdry glamour is sated, and I can move on. 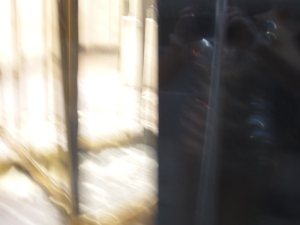 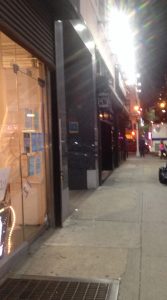 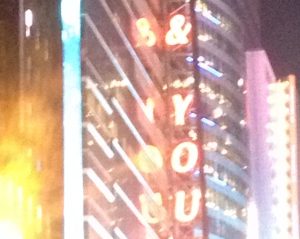 The image-maker also acts as a media-tor, allowing me to take in the overwhelming commercial and residential hyper-lighting. Filtered through a lens, the aggressive security lights become beautiful stars and the bright silent shout of corporate presence becomes a delicate dance of reflection and glow.

Side note: Today was the first day where there was a steady stream of visitors to the space, both friends and strangers. Reactions from strangers ranged from deeply interested to slightly befuddled, but people in suits seemed moved to make hostile comments (a first in my Salvage/Salvation career). James came and labelled everything, and Tara, a friend of my excellent assistant Morgan, came and started to realize one of the salvaged patterns, using found fabric and nails for pins (the available materials). 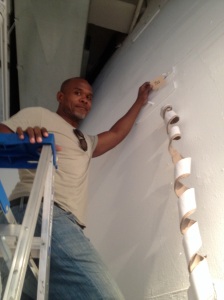 The installation is constantly evolving, never finished, a rehearsal-in-progress with no culmination. It will keep changing and building until the moment when its dismantled and redirected into the waste stream again. 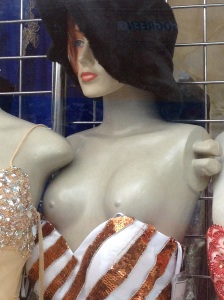 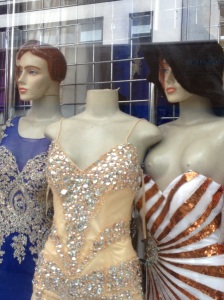 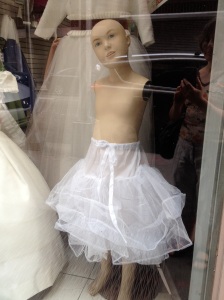 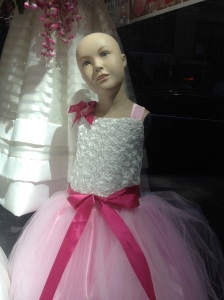 Every day when I come to 266, I’m greeted this family next door. I was glad to see that they eventually clothed the angelic child, but I’m a little worried about the dynamic between the three other people. One has no face, and the others look dour, and, while I enjoy the Cretan style of dress, I’m not sure it’s intentional on the part of bare-breasted person wearing it.

Every day when I come to 266 I’m greeted by the hot breath of desperation that emanates from this area. It’s camouflaged by the blast of light from commerce, but people burdened by poverty and mental illness are very much present, along with the hustlers and peddlers and corporate logo wars. As in the past, the people left behind by bad policy and institutional racism are here, now they’re just piquantly highlighted by the flashing lights of entertainment venues and brand-name emporiums. Everyone seems extra-rushed, extra-stressed; the people living on the streets, the tourists, the people who work in the area. The only spots of calm are the service workers, who maintain their cool and even manage to smile and be good-humored in the face of what must be an overwhelming tide of bullshit.

Salvage/Salvation is built to respond to the places it inhabits, to become what that space needs. Scavenging is the opposite of consumption, and SHINE has become a space for contemplation in an anti-contemplative area–subtle slow, the opposite of slick. SHINE exists as a ghost presence, a complexity, a double-take shop window for the opposite of selling. SHINE, like its neighboring mannequin family, is only strange when you look closely, and then a trickle of doubt, or confusion sets in. I see it on the faces–a question. We take those questions and use them to build a bulwark against the commercial certainties surrounding us.

I was supposed to write this entry on Saturday June 11th, but then time got away from me. Then the massacre in Orlando, Fla. happened, and I was paralyzed for a while. “Light” became muzzle flash and emergency vehicle red and blue, became thousands of candles in memoriam. 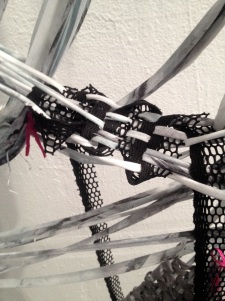 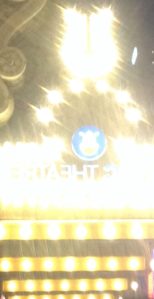 Last Friday someone who stopped by the space pointed out that the “Salvation” in “Salvage/Salvation” dove-tails well with the theme of light. Light is a mainstay of spiritual and religious practice. The Abrahamic religions are full of burning bushes and sentient stars; in Buddhism en-light-enment is usually accompanied by some kind of photonic revelation. But today I want to seek the comforting, nurturing embrace of the dark. Too much light is too much, and the false light is worse than none. In the dark, we dance to the beat, we love who we want, we celebrate our lives. Come back, all you departed souls, and dance with me in the dark. I promise to keep the lights subtle and lovely, just like you. 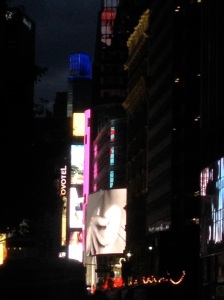 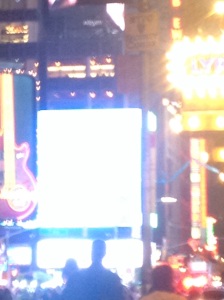 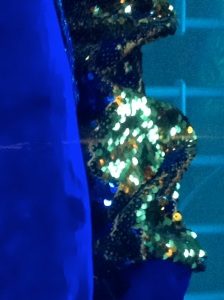 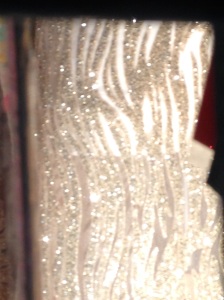 Light is the visible graceful trace of a brooding thrumming materiality that squats in the dark, elsewhere.
Substations and power plants, nuclear waste and mountaintop mining. Buzzing wires cutting through forests, skeletal transformers etching the sky. Then we see–light. Like the internet, a place that seems like a there with no there there but which actually devours space and energy through supercooled data “farms.” Is the word “farm” supposed to make the reality of these behemoths more palatable? We’re growing the internet, like green leafy plants! In the heart of the big city the glaring, blaring, gorgeous, garish, looming, glowing pit of Times Square leers at me from a few blocks north. I recoil, turn for consolation to the more sedate sparkle of metallic thread and sequins.

Side note:
Improvisation, contingency, and collage. Salvage requires a nimble pastiche brain. I thrive in the realm of instant decision-making, love the crack of ah-ha in figuring out what the hell this is supposed to be. I couldn’t know until I was here. Now that I am the shape of the piece is revealing itself–a surprisingly quiet assemblage of scraps and ingenuity. 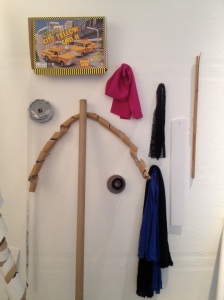 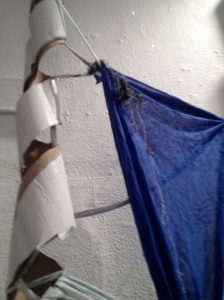 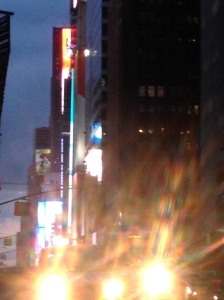 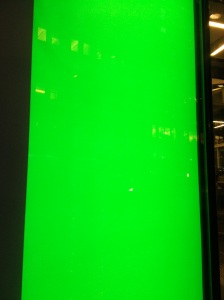 6/9/16
We are extravagantly attracted to electric light.
We spill it everywhere, throwing it around wildly in a frenzy of orgiastic excess. Our atavistic but originally intelligent fear of the dark has metastasized into something more complicated. We can’t seem to help gorging on it–even the most parsimonious paragon of frugality will warm their eyes by electric light, lap delicately at their computer screen, and dip their hands casually into the river of public photons.

Side note:
I seem to be making a study of the army of ghost women that populates the windows of the Garment District shops. Their icy, usually headless perfection is set off by the most extravagant glittery dresses… 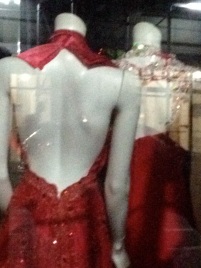 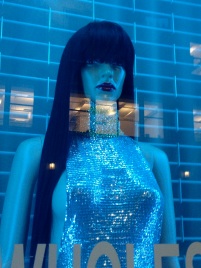 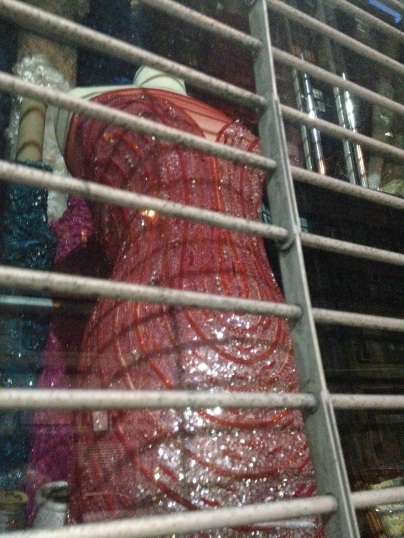 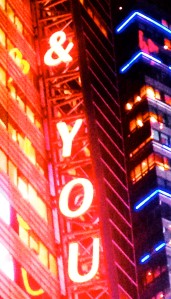 6/8/16
Can you recycle light?
Is there some way to re-use light without producing more?
Mirrors and shiny things, amplifying light. Refracting and reflecting, deflecting and distracting.
Light is a form of consumption, which seems strange. Light is a not-thing, a thing that’s not a thing, a particle and a wave. It exists everwhere and nowhere. But still we can eat it.
I’ve been biting off pieces of the lights of the Garment District and Times Square, stealing the glitter and shine. There’s plenty to go around, a feast of LEDs and LCDs, bejewelled dresses, sequinned fabric, neon accents, window glass and safety lights. In 90 minutes I’ve gathered enough to last a lifetime.

Side note:
As I gather garbage in Midtown late at night, and notice people noticing me, I wonder; what defines me more? My middle-aged white-ladyness or my scavenger-ness? Does my scavenging automatically negate the other signifiers conferred by my outward appearance (e.g. comfortable, safe, privileged, powerful)? Do I look incongruous or just down on my luck? I’ve decided that scavenging requires a fancy outfit–if I accentuate the one signifier, what happens to the other?